National Energy’s Founder, CEO & Chief Scientist, Dave Robau saying “We are extremely excited to have General Clark joining our team, because he brings a world of experience and leadership across a broad spectrum”.

Wesley Clark, a retired Army General and Supreme Commander of NATO, is Chairman of Wesley Clark & Associates in Little Rock Arkansas saying “National Energy is producing innovative, environmentally friendly alternative power systems, and this is a good fit to handle the green energy needs of our military, worldwide.” General Clark is also the Chairman of Enverra Partners, a Washington D.C. based investment banking group.

General Clark graduated the United States Military Academy (West Point) in 1966, and after attending Oxford University, served in Vietnam with the 1st Infantry Division. Later in his career, he was a White House Fellow, and involved in the movement for Vietnam Veterans Memorial. Later assignments involved the National Training Center (NTC) at Fort Irwin, Cal, and Commanding General of the 1st Cavalry Division at Fort Hood, Texas. He was the Supreme Commander for US & NATO during the Kosovo War in 1998-99. He is the author of several books, including his memoir, “A Time To Lead: For Duty, Honor and Country” (St. Martin’s Press, 2007).

After graduating from the University of West Florida, Mr. Robau began his career as a Biologist with the U.S. Army Corps of Engineers, and went on to serve as an Environmental Scientist with the Air Force Special Operations Command (AFSOC) in Florida. Prior to that, he held positions with the U.S. Fish & Wildlife Service, the U.S. Department of Justice, U.S. State Department, and other private sector organizations such as Science Applications International Corporation (now Leidos Engineering). He started National Energy USA in 2012 to bring emerging and innovative energy technologies into the commercial market. He is the founder and Executive Director of a not-for-profit called Gulf Coast Energy Network where he leads a group of energy and sustainability professionals dedicated to expanding the renewable energy market across the Gulf Coast. 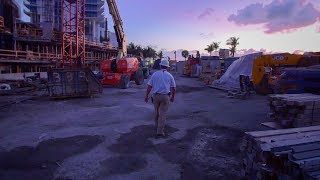